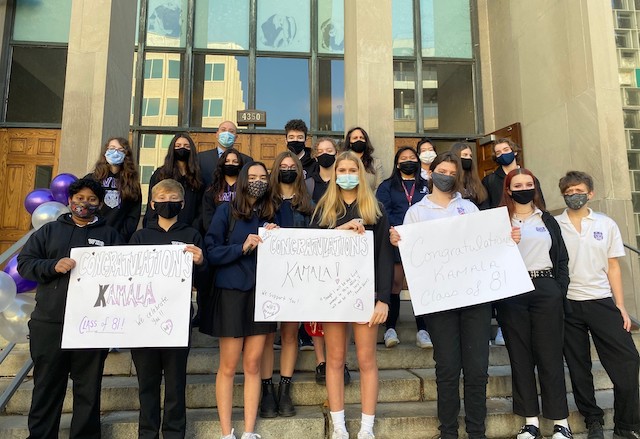 The staff, students, parents, and commissioners of the  English Montreal School Board wish to express their sincerest congratulations to Westmount High School graduate Kamala Harris on becoming the Vice-President elect of the United States.

“This is a moment of extreme pride for the EMSB and the public-education system in general,” stated EMSB Chairman Joe Ortona.

Mr. Ortona and  Interim Director General Evelyne Alfonsi joined staff and students outside of the school on November 9 to celebrate this great moment in history.

“From the moment Kamala Harris became a candidate for the Democratic nomination for President of the United States, her story was integrated into discussions of the  American electoral system in some classes at  Westmount High School,” noted EMSB Interim Director General Evelyne Alfonsi. “In the weeks leading up to her historic swearing in ceremony, this teaching moment may very well spread to more of our schools.”

Ms. Harris attended Howard University in Washington.   During her White House bid, she never shied away from mentioning that people attempted to box her in or doubted her as she sought to pave a path in politics. "I didn't listen. And the people didn't listen, either. And we won," she would say.  “There is no question that Kamala Harris is a wonderful role model for any student to follow,” said Ms. Alfonsi.

It might be a lofty dream, but Mr. Ortona hopes that during the four year mandate of the Joe Biden-Kamala Harris administration that any Canadian visit by the future Vice-president could include a visit to her former high school where a hero’s welcome would await.

With a youth and adult sector population of more than 37, 000 students, the English Montreal School Board (EMSB) is the largest English public school board in Quebec. Established on July 1, 1998, when the province created new boards along linguistic lines. Our network consists of 77 schools and centres. For more details, visit the EMSB website at www.emsb.qc.ca.

Oct 18, 2021
EMSB awaits Quebec Court of Appeal ruling on Bill 21
The English Montreal School Board is hopeful that a Quebec...
Read More