EMSB continues its tradition of public speaking, taking it online this year 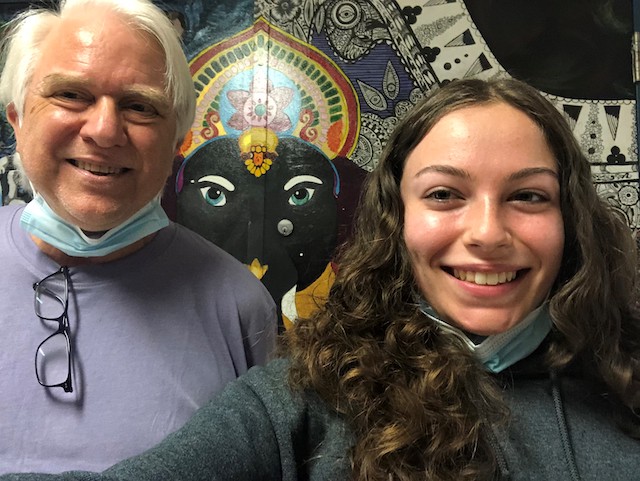 In first place among Secondary V speakers was LaurenHill Academy's Sabrina Morelli, who delivered her speech "Women’s Empowerment: The Nightmare Dressed Like a Daydream" in May. She's seen here with her teacher Michael Strauss.
By: Kristin McNeill

Forty-five students from nine English Montreal School Board (EMSB) high schools presented narrative and persuasive speeches on April 28, May 4 and 5 in the annual public speaking competition. The format this year was a three-day morning event, inviting families and special guests to be the audience via the internet.

The “Power of Story” was the theme for the Cycle 1 students – and was designed to encourage speeches that would inform, and change heart and minds, explained Anne Beamish, Pedagogical Consultant with the EMSB’s Education Services, and the event’s organizer and host. Cycle 2 students had the task of writing persuasive speeches, under the theme “Words to Change the World.”

The six judges – Patricia Abbott, director of the EMSB Chorale; Megan Mullin, Early Education Consultant; Paul Kettner, Literacy Consultant; Moksha Serrano, Social Science and Art Consultant; Nicholas Doyon, Arts Consultant; and Francois Dupraz, ICT Consultant – were hand-picked this year from within the EMSB, a departure from the tradition of inviting judges from the community. The Rotary Club of Westmount and the Women’s Canadian Club of Montreal, whom Ms. Beamish described as the EMSB’s long-time “allies in public speaking,” were not able to participate this year due to the pandemic. 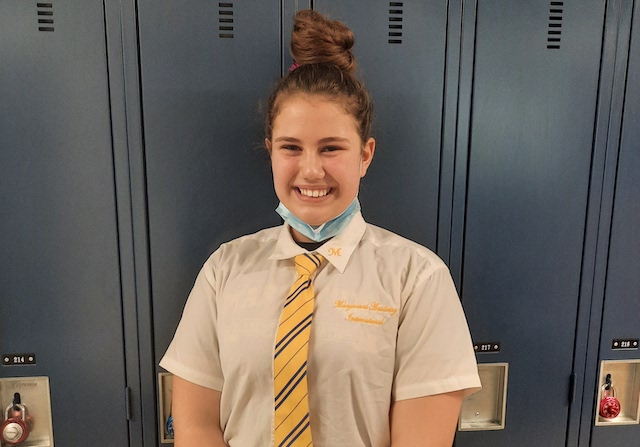 Haley Ross, in Secondary II at Marymount Academy International gave her speech "Suppressed Nightmare" in May during the EMSB public speaking competition.

Although the student presenters may have missed the feeling of making their case to a live, in-person crowd, the online format still provided an audience, who were encouraged to leave their cameras on. And though they were “muted,” attendees could be seen listening attentively and giving applause. Also, to accommodate the virtual format, speeches were a little shorter this year – limited to four minutes each, explained Ms. Beamish. The judging criteria was the same as past years.

As always, students remained anonymous, by name and school, and were identified by the title of their speeches. They were called to the online “stage” in a Student A, B, C sequence. They mostly did their speeches from their classroom, or in the case of Virtual Learning, from home.

The Express attended the session on May 5, where eight Grade 11 students each gave persuasive speeches on topics of social and political importance. “You are part of the tradition that’s been going on since 1939,” Ms. Beamish told them before launching the day’s event.

Westmount High’s Cyarra Chase led the morning’s event with her compelling speech “Underrepresentation of Minorities in Workplaces.” She argued that there is a lack of diversity in boards, workplaces and places of higher education that is caused by socio-economic reasons related to time and money.

Charena Dhanraj, from EMSB Virtual Learning, spoke about the negative societal labelling of foster children in her “The Stereotypes of Being in the Foster Care System.” “Media should do better” in its portrayal of foster children, she argued. Foster kids should not be labelled as “bad kids,” instead society should “believe in us.”

Mario Gentile, a student at Laurier Macdonald, delved into “Conquering life’s trials” and spoke about life as “a series of tribulations and consolations,” the feeling of being hopeless about the future and striving towards “prosperity and triumph” through “motivation and will power.”

In her speech, “Will there ever be an ethical reason for cloning,” Melissa McMannis from Marymount gave three reasons why human cloning is unethical.

Other topics addressed in that day’s persuasive speeches included women’s empowerment, why young people should be consulted about school, why teenagers should not be allowed to drive, and how self-care has become commercialized.

Winners received a certificate and a medal based on the winning design from the class of Royal West Academy teacher Stephan Nemeth in a board-wide contest. The medals were printed in-house on 3-D printers.

She made a special shout-out to EMSB Virtual Learning, which, despite being a brand-new schooling format, had added the public speaking competition to its offerings.