EMSB high schools salute their 2020 grads – in the most creative, heartfelt ways they can during social distancing 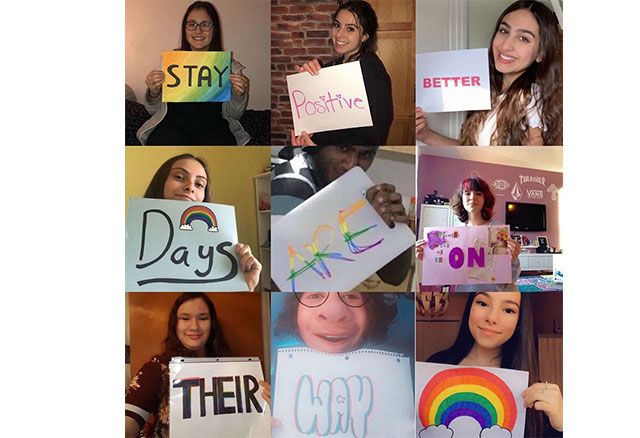 Crossing the stage to shake hands and accept diplomas, tossing caps into the air alongside fellow classmates, giving embracing good-bye hugs and mingling at grad parties – this year’s high school graduates will depart from these traditions and instead will mark the end of secondary school in different ways – apart physically,  but together in spirit.

In their new role delivering distance learning, English Montreal School Board (EMSB) teachers and school administrators have been devoting their attention to harnessing technology and delivering material to students since the Quebec Ministry of Education launched that phase  this  spring. But, as public health directives during COVID-19 evolve, grad committees – working virtually – have been brainstorming innovative ways to celebrate departing Secondary V students.

Several schools have shared details of their events and upcoming plans for what they hope is a meaningful way to acknowledge the accomplishment of completing secondary school education.

At FACE, EMSB’s downtown fine arts school, Grade 11 students were serenaded and applauded the afternoon of May 12, when they were called back to the school to collect their belongings. The simple and mundane (and for some sad) task of emptying their lockers was part of a special “circuit” that teachers and staff had set up to make their last visit to the school memorable, explained Vice Principal Jennifer Harriet.

In 10 separate groups, students entered the school through the back door, stopped at stations along the way, walked up to their lockers on the upper floors, where they discovered a collage of photographs – depicting outings, theatrical productions and sporting events – pinned to their lockers. They then proceeded back down to the main entrance, applauded all along the way by teachers and staff maintaining physical distance. When they arrived at the school’s main entrance way, they were treated to a choir of teachers singing “Flying Free” by Don Besig. (Traditionally, it is the Secondary IV students who would sing to the graduating class, Ms. Harriet explained.) Then they “were applauded as they exited the main doors for the last time as Sec. 5 students,” she said. Staff sung the song every 45 minutes as the groups of students all filed through. A video is available here to see select scenes

“With everyone working from home, you haven’t seen the students, and you come back to be reunited with your colleagues, and then to be part of this? It’s a day I will never forget,” said Ms. Harriet. The teacher who came up with the initiative was ​Stéphany-Pascale Gauthier, Secondary III  to V vice-principal from the school’s co-school board, the Commission scolaire de Montréal.

The school is planning for a graduation event in the fall. 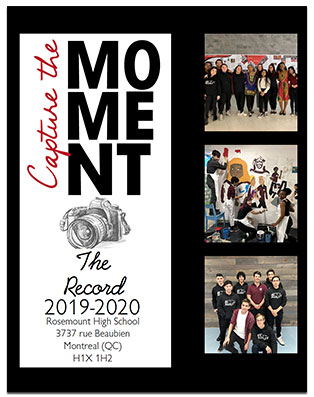 Normally, a concerted group effort from students and staff, the Rosemount High School yearbook this year came to fruition through a small team led by Jessica Awadalla, ERC and FSL teacher. With students at home during the lock-down, it was a challenge to obtain the variety of photos that would normally fill a yearbook marking the special, final year of high school, she said. “The spaces that were empty had to be filled,” she explained, in particular photos that would normally put on record the graduating class’ trip to New York City, team sports competitions and other special events.

Using a web application tool from Jostens Canada, the team divvied up tasks and managed to gather enough “throwback photos” and photos of students during the stay-at-home order to populate pages and bring into fruition a yearbook for the 2020 graduating class. Grads will be receiving their copies in the fall, as part of a graduation ceremony the school hopes to have.

Another high school working with the theme of the yearbook is Royal Vale School in NDG. A short, outdoor “yearbook signing day” has been planned for its elementary and high school students. Yearbooks will be distributed in the school yard, and students will have the opportunity to sign each other’s book, said Principal Mauro Zampini, adding that the graduation ceremony for secondary school grads is scheduled for the fall.

Video salutations to grads at Westmount High and James Lyng 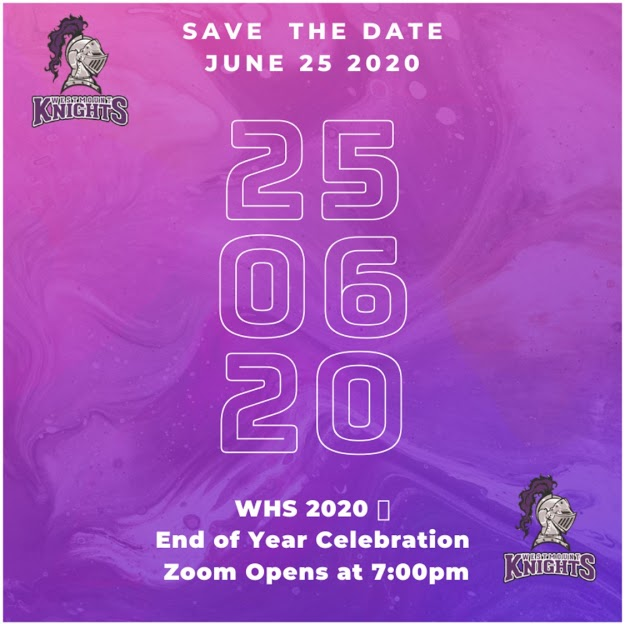 At Westmount High School, a weekly YouTube show “The Westmount Highlights” continued to air during the period of distance education, explained vice principal Matthew Shapiro. Two June episodes featured video messages to the graduating class from well-known and accomplished figures. Jennifer Maccarone, Westmount-St. Louis MNA, delivered a short speech that centered on the theme of time. “Take time to make memories,” she told them. “Commit this last year – and all the wonderful experiences you’ve had at Westmount High – to memory.” She also advised them to “fight for what matters to you.” Multi world cup freestyle ski champion Mikaël Kingsbury also sent in a video clip, congratulating grads on completing secondary school and telling them to look back at “les belles années” that marked their high school time – and to look forward to the great years they have ahead to move onto higher education and realize their dreams.

The graduation ceremony is being planned for the fall, in line with its traditional timing. But, Mr. Shapiro explained, the school is organizing a virtual prom for June 25 that will include prizes and videos.

When James Lyng High School in St. Henri decided to postpone the graduation ceremony until the fall, with the hope gatherings would be permitted, they turned their attention to creating a video to honour each graduate, said Marilyn Ramlakhan, vice principal. A video of pictures throughout the years was compiled by students and staff to honour the graduating class, she explained. “They will also include a section on current events in the world because it was an interesting year for them.” And students continue to work on their yearbook online in their Integrative Project class.

Hats off to the grads at John Grant

John Grant High School in Côte St. Luc was busy preparing for a “Hats off to the grads” ceremony in mid-June for students, their families and friends. Principal Jennifer LeHuquet described the ways grads would be honoured: Students were to receive a celebration bag, containing a graduation hoodie and other “top secret” goodies, which was to be delivered to them in person ahead of the ceremony. Ms. LeHuquet is scheduled to make an address, which students would watch online. Grads would also hear from student Hamzah Patel, who is expected to deliver a farewell speech, and different staff members will “speak on their behalf about their journey and their accomplishments,” she explained. “We’re looking to create a family feel and intimate affair,” she said.

Also part of the plans was a special, live virtual performance by autism advocate Steven Atme and the traditional “throwing of the hats,” which will be done streaming by Zoom in their individual homes.

“The graduation committee has been working hard all year long to raise money towards their grad.  They are fully on board with these plans but still want a homecoming when gatherings are allowed again so that they can walk across the stage and receive their official certificates,” she said.

Decorated tables, a toast and a chance to re-unite at Laurier Mac

Laurier Macdonald High School in St. Leonard has planned a creative, in-person send-off for the grads of 2020. Vice principal Miranda Serrecchia described the vision: "Students will come to school on June 19 in groups of up to 10 at a time. We will have two tables set up and decorated as if it was their prom tables." She also said students will have a chance to reminisce briefly with each other over a glass of sparkling juice. They can also sign the ceiling tile, which is installed above the school's central staircase, take a photo under the banner, and receive a parting gift and an invitation to watch the grad video online.

At Vincent Massey Collegiate in Rosemount, the prom committee was busy working on organizing gifts for the grads, including a special shirt, notebook and pen.  In late May, each student was sent by mail a letter “they wrote to their future selves,” when they were in Secondary I. “They’ve waited five years to read these,” said Principal Franca Cristiano.

Both Vincent Massey Collegiate and Royal West Academy are putting the finishing touches on plans to mark graduation with special celebrations at the new Royalmount Drive In Event Theatre venue near the Decarie Circle.  Please stay tuned for more information.

Maria Caldarella, principal at LINKS in Ahuntsic, was excited to share her school’s plans for its five graduating students. Along with their families, the students are invited to an outdoor ceremony on school grounds on June 19. Each family will sit at its own table, with the proper distancing between others. Teachers will give a testimonial about each graduate and will present them with their certificate in a gift portfolio with a scrapbook of photos. Because others in the school can’t be at the gathering, staff was working on a letter-writing project – a farewell letter to each from their friends at LINKS.

The release of balloons into the sky was also being planned. “It’s really just to have a visual, a moment, a feeling, an end,” said Ms. Caldarella.

A virtual prom party was being planned on the Microsoft Teams platform, but the in-person, live event is what everyone is really looking forward to. “It’s really to see everyone,” said Ms. Caldarella. “It’s really to have the feeling, ‘I did it.’”

Oct 16, 2020
McGill Effective Parenting Series: Parenting in the Digital Age is being offered at no cost this year
Read More