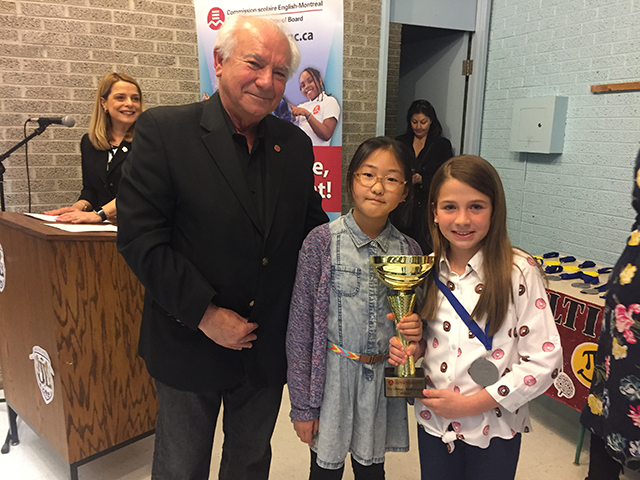 MONTREAL, MAY 16, 2019 –  The Ultimate Math League stems from a Math Enrichment Initiative which the English Montreal School Board introduced in order to seek to promote higher mathematics learning across the board. It was born thanks to the contribution of EMSB Commissioner Joseph Lalla, a former teacher and principal. This is a math competition that not only focuses on problem-solving, and critical thinking skills, but encourages teamwork as well. It’s a fun way to get kids excited about math.

This was the first year the EMSB embarked upon this initiative, noted Assistant Director of Education and Technology Services Anna Villalta. “It was a competitive and enriching mathematical journey that essentially, implied a yearlong competition which included qualifying rounds, quarterfinals, semi-finals and final,” she said.

EMSB Math and STEAM consultant Tina Santoianni was instrumental with this initiative.

All elementary and high schools of the EMSB were invited to participate in this project. Students from grades 4 to 11 volunteered for the competition.

In total there were 20 elementary schools, seven high schools and 29 lead teachers who participated. In total, 1,200 EMSB students took part.

The qualifying rounds consisted of a series of math questions tackled by individual students who amassed points for themselves by answering mainly questions related to mathematical logic or grade-level mathematical content: like computational, arithmetic or geometry-related questions. It was during the next rounds (quarterfinals, semi-finals and finals) that the students were able to collaborate and work as a school team.

Following the four qualifying rounds, the four students with the highest score at each level (in each school) made it to the quarter-finals.  The school teams made up of four students then represented their schools while they competed against other participating EMSB schools in the quarter-finals.  The schools that scored over 100 points in the quarter-final round moved on to the semi-finals.  At the elementary level, four schools at each grade level with the highest scores moved on to compete in the finals.  At the high school level, two schools at each level having amassed the highest scores (and in our case some schools were tied so we had three at certain levels) who competed in the final round.

For the final round, the students competed in a jeopardy style face-off where student teams responded to a series of math questions (grade-level content specific questions made up of Number theory, fractions, decimals, probability and math logic at the elementary level; at the secondary level; functions, algebra, geometry, probability and statistics) for a value between 100 to 500 points awarded to each question answered correctly.

The winning teams, recognized recently at a ceremony at James Lyng High School in St. Henri, are listed below.

You can watch this video: https://youtu.be/iByfQfKq6dE