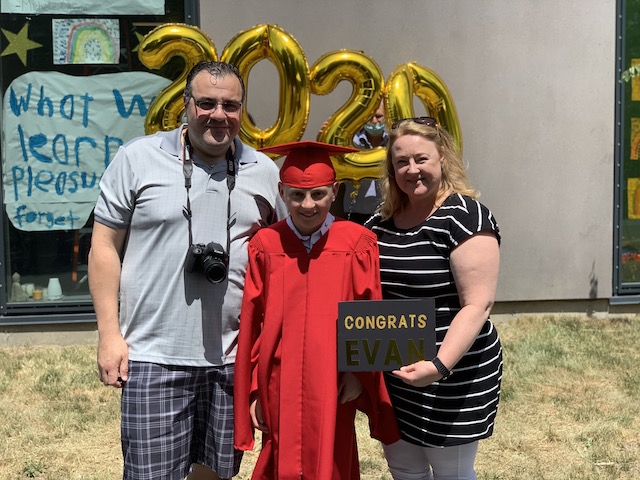 In normal years, the Mackay Centre and Philip E. Layton (PEL) graduation ceremony is an elaborate and emotional event. While circumstances did not permit for a grandiose grad this year, it did not alter the strong sentiments that this major life event brings with it.

On the very hot day of June 19, 15 graduates and their parents attended a special ceremony set up on the lawn of the school, with ample space to accommodate social distancing and tents to protect from the sun and heat.

Thirteen Grade 6 Mackay Centre School students graduated this year. Many will be moving on to other high school programs, the Senior class at Mackay or one of their two satellite classes. “The teachers have taken a huge initiative to make graduation special for these kids,” said Mr. Watson, vice principal of the Mackay Centre and Philip E. Layton Schools. "It’s tough because our Grade 6 students don’t necessarily move on together as they come from so many different areas.”

The Mackay Centre School celebrated three graduates at the senior level. Two of these students, one from the Mackay Centre Senior Class, the other from Westmount High School’s Satellite Class had attended Mackay from pre-K to age 21. “These families have been involved with the Centre for 17 years. It’s a big deal,” said Mr. Watson.

One student graduated from the Royal Vale Satellite Class, which is specifically for deaf students. Her ceremony was virtual, with her class, teachers and both rehab and education staff that have worked with her over the years in attendance. Staff went all out, preparing a special slide show and speeches, and even shipped a cap and tassel to the home of this student.

Two graduates from Philip E. Layton School were treated to a drive-by ceremony at their home with their teachers the following week.

Saying goodbye was difficult, no matter which level the student graduated from. “While attending our school the students and their families build strong relationships with other students, teachers, PABs (personal support workers) and the rehabilitation staff and therapists that have been working with them over the years,” said Mr. Watson. “This was the last time they’ll all be together, and they have been such a huge part of each other’s lives.”

The Mackay Centre and Philip E. Layton Schools have welcomed approximately 31 students back to classes since it reopened on June 1. According to Mr. Watson, the students and staff managed quite well. Staff were divided into classroom teams that mainly consisted of teachers, childcare workers and PABs, with nurses moving between classrooms. “Students and staff in each class were functioning as isolated teams to limit contact with others,” said Mr. Watson, adding that the Physical Education team staggered the timing of recess so each class could be outside one at a time “It was a challenge, but for the most part the kids were really good,”

Due to the nature of the school and needs of the students, physical distancing was not always possible. Staff needed to be close to students, particularly those in wheelchairs. They wore personal protective equipment when working in close proximity with children, be it for toileting or feeding or other needs. Gowns and masks were changed between students, equipment was sanitized after each use and was not shared, short of balls that could be kicked around at recess.

“We see we can manage,” said Mr. Watson. “We marked all hallways to indicate two-metre separations and the Phys. Ed teachers used cones and plastic circles to mark spaces outside when needed. “Fortunately, our hallways were designed to be wide enough to accommodate two wheelchairs.” 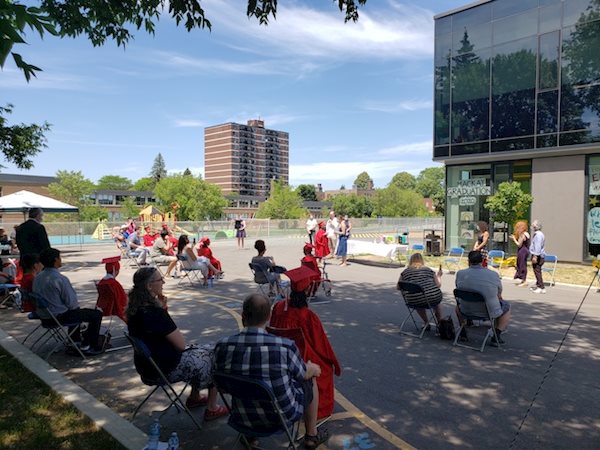 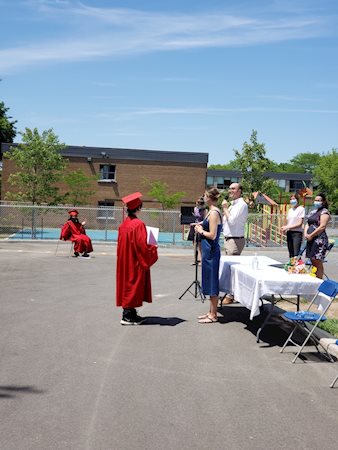 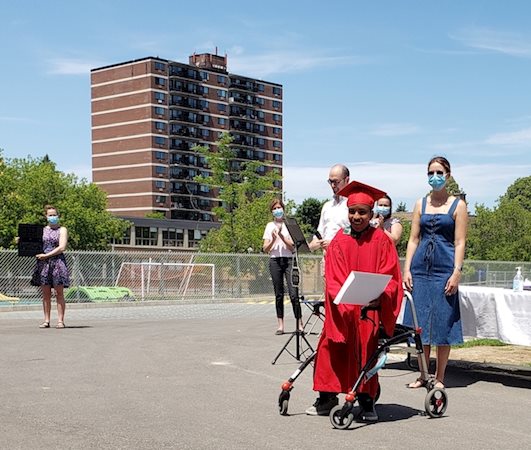 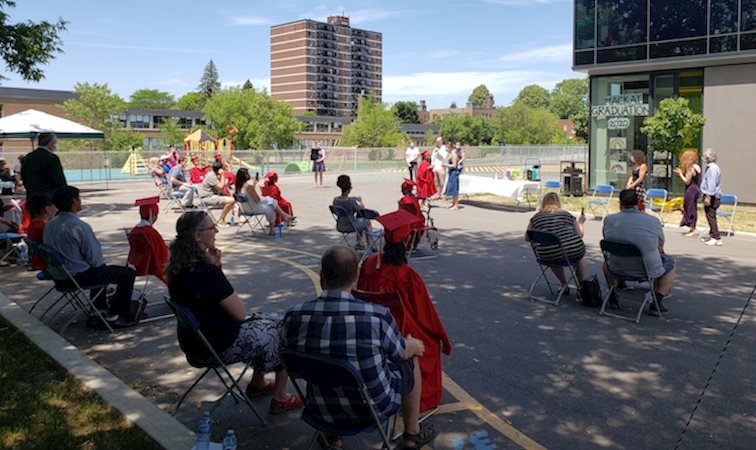