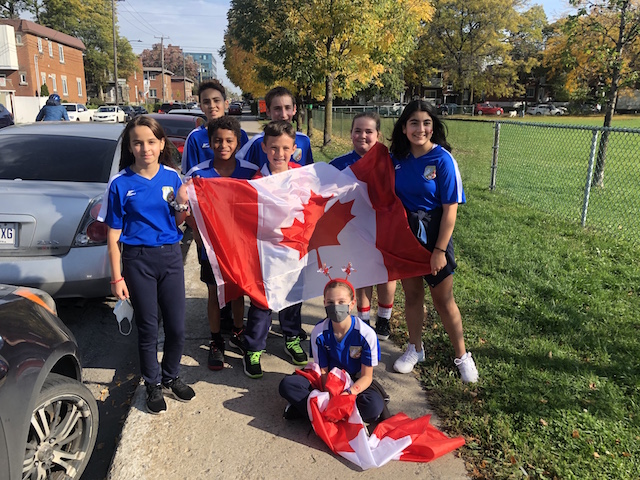 This year marks the 40th anniversary of Terry Fox’s Marathon of Hope, and many EMSB schools are creating innovative, fun and safe ways to continue the legacy of the great Canadian. Fundraising takes place online, but the actual physical event is being played out in different and interesting ways among the participating schools. The official date for the Terry Fox Foundation school run across Canada is September 30, but EMSB schools are having their events at different times during the fall.

“We fully understand how busy educators are during these challenging times - in the same way Terry Fox inspired people by running the Marathon of Hope, educators are inspiring us by finding the time to raise funds for cancer research,” said Peter Sheremeta, provincial director of the Quebec branch of The Terry Fox Foundation. “This has been such a strong tradition at EMSB schools – in the past 40 years, they have raised $2,142,965 for Terry’s dream of a world without cancer.”

The EMSB school with the most years participating in the Terry Fox Run, as recorded by the Foundation, is Elizabeth Ballantyne School – in its 35th year. This year during the week of October 5, students will once again take part, said Phys. Ed teacher Stéphane Fortin. But instead of running through the town of Montreal West, cheered on by family members, students will be running around the outdoor track at the Montreal West arena as part of their Physical Education and Health class.

Though Roslyn Elementary School traditionally does a big event around the Terry Fox Run, this year the school had to scale it back, explained Physical Education and Health teacher Tallow Mitten. However, all 27 classes, representing the whole school, will be participating on October 6 and 7. Each class will run for 10 minutes, with two classes running in separate areas of the schoolyard simultaneously. Ms. Tallow said fundraising will take place online. Students will watch a video about Terry Fox in gym class, and artwork around the renowned Canadian have been planned for the younger classes. “We will continue to reinforce the importance of cancer research and Terry's legacy,” said Don McCarthy, also a Phys. Ed teacher at Roslyn. Not including this year’s fundraising, Roslyn has raised close to $300,000 for the cause, the highest to date among EMSB schools.

The Terry Fox Foundation has created an innovative way for schools across Canada to hold an alternative event to the traditional annual run. Riffing off the Foundation’s “What’s your 40” challenge is Honoré Mercier Elementary and Nesbitt Elementary schools’ own “40 for 40.” The brand-new initiative, also unfolding at Rosemount High School and Perspectives l and II high schools, takes place over a month, starting September 28. The activity is spearheaded by the Physical Education and Health departments and the Ethics and Religious Culture departments of each school alongside Spiritual Community Animator Vince Lacroce. Students and staff members will be participating within their individual classroom clusters to respect social distancing. As a nod to the 40th anniversary, each student will be encouraged to attain 40 kilometers over a period of 30 days by walking or jogging. Students and their families can record their mileage on the new Terry Fox Foundation app called MoveSpring. At the high school level, the classroom that walks the most kilometres will be awarded a pizza lunch courtesy of Les Délices Lafrenaie.

Peter Tsatoumas, Physical Education and Health teacher at Honoré Mercier, said they were hoping that each student could accumulate 40 kilometres during the month as a nod to the impressive marathon-long distance (about 40 kms) that Terry Fox completed each day over the 143 days of his Marathon of Hope. “They will keep track of their kilometres by putting them in Google Classroom, where we have created a calendar for each student to fill out. Our main objective as a school and community is to be able to do 5,373 km in our time frame,” he said. The school has supported the Terry Fox Run for the past four years, and was among several others in the EMSB to receive a personalized video message from Fred Fox, Terry’s brother.

Edward Murphy School’s Terry Fox event will happen this year, but with some adjustments, said Grade 1 teacher Sandra Greco, who recalls the Terry Fox Walk has happened every year of her 23 years at the school. Parents in years past have been encouraged to physically participate alongside their children in a walk around the neighbourhood together, but this year their participation will be limited to online donations. Kindergarten and cycle 1 students will stay in their classroom bubbles and walk single file behind their teacher around the schoolyard track. Cycle 2 students will walk in the same formation but on the inside perimeter of the yard, while the Cycle 3 students will walk on the sidewalk around the school. “The Terry Fox story is an inspirational story that never gets old and one which everyone can relate to,” said Ms. Greco. “Although we are faced with this pandemic, it was very important to continue the tradition of the Terry Fox Walk at our school. It is important for children to realize that life can have its fair share of challenges and its how we deal with them that can make a positive impact on others. When we work together, great things can happen.”

This year, John Caboto Academy’s Terry Fox Run will have several components, explained Joseph Romano, Physical Education and Health teacher. For the fundraising portion, students can collect donations online on the school’s Terry Fox Run page. On a day in early October, a virtual assembly attended by students in their own classroom bubbles will occur just before the run. “The plan is for the whole school to be active at the same time, and we will be spread out in our school yard and the park near our school,” he said, describing the hour-long event. Exiting and entering from different doors at staggered times, each group will take part in activities modified for their grade level, from pre-K to Grade 6. It is the school’s second year organizing a school run. Mr. Romano said he was inspired by this quote by Terry Fox: “Even if I don’t finish, we need others to continue. It’s got to keep going without me.” 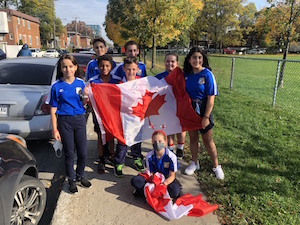 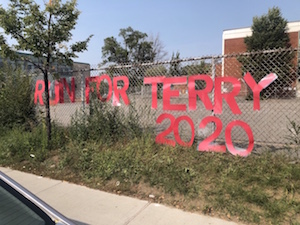 A banner runs along the fence at John Caboto Academy.

The motto at Leonardo da Vinci Academy’s run this year is “Try your best and have fun!” The school, which has been participating in the Terry Fox event since 1999, saw its entire student body – from pre-K to Grade 6 – running laps, separately with their classes, at a nearby park on October 1. LDVA ran a total of 388.8 kilometres and raised $7,605. “The generosity of our school community over the past years has been astounding!” said Danny Pietroniro, Physical and Health Education teacher. “Our students, staff and parents gave it their all today!” said Mr. Pietroniro. 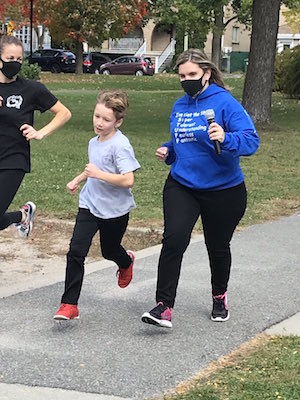 October 1 was the Terry Fox Run at LDVA.

Norman Katz, Phys. Ed teacher at Royal Vale School said all 21 elementary classes will participate in their own bubbles during their Physical Education period by walking or running for 40 minutes, followed by a five-minute cool-down. This will take place over three days at the end of September in the school’s large outdoor field. Mr. Katz, who has been organizing the run for the 18 years he has been at the school, said normally there is a school-wide assembly and mass walk/run, where parents are invited. It was not uncommon to have 600 people participating at once. Despite the pandemic, “It must live on; it must go on. We are very excited to continue Terry’s legacy,” he said. Fundraising for the initiative was to be done online.