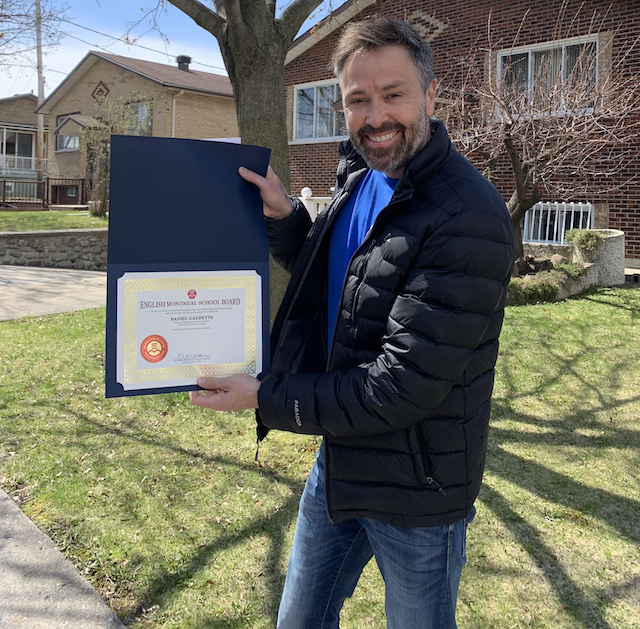 While the Leonardo Da Vinci Academy community in RDP has worked alongside the Montreal Neurological Institute since 2016, when teacher Daniel Gaudette was diagnosed with a brain tumour in December 2020, their special relationship instantly became personal.

After persevering through his six-month battle, Gaudette will make his triumphant return to the school (12025 André Dumas) in RDP on Wednesday, June 16 (June 17 in case of rain) by carrying the Olympic torch to kick off the school’s Neuro Olympic Day (8:40 am).

The special event will serve as both the school’s annual fundraiser for the hospital and an activity day for the students. A cheque will be presented to the Neuro during the Closing Ceremonies at 2:35 p.m.

Mr. Gaudette, who was named one of the EMSB’s most outstanding teachers in 2020, remains a beloved member of the Leonardo Da Vinci Academy staff. His diagnosis sent shockwaves throughout the community, with students, staff and parents rallying around him throughout his treatment. While still on leave, Gaudette has supported the school virtually during this school year and plans to return full-time in September.

Since 2016, Leonardo Da Vinci Academy has raised $20,000 for the Montreal Neurological Institute. Donations can be made at: https://www.mcgill.ca/seedsofchange/project/brains-need-ldva