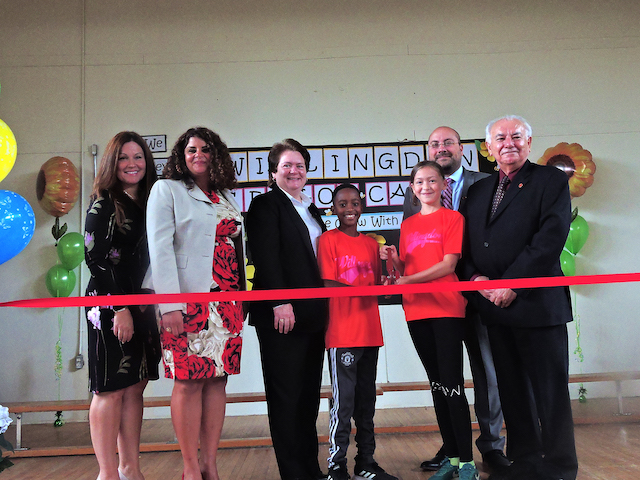 The mood was festive October 2 when Willingdon senior students, administrators and teachers welcomed special guests and media to its Coronation and Somerled building to officially inaugurate the school’s new senior campus in NDG. The 150 students, which make up Grades 5 and 6, were joined by English Montreal School Board (EMSB) officials, several politicians, representatives of the Willingdon’s Home and School Association and its Governing Board, and parents. Penny Fenwick, a volunteer at the school for some 50 years, was also in attendance.

Speeches of thanks, the story of how the campus came into being and student displays of poetry and music made up the morning of celebration. A special cake with the Willingdon logo, and cupcakes for the children, were also part of the fun.

Vice Principal at the senior campus, Maya Doughan, acting as emcee hoped that the morning program would offer “a glimpse of the vision, hard work, dedication and love that went into making this beautiful addition to Willingdon Elementary School a reality.” 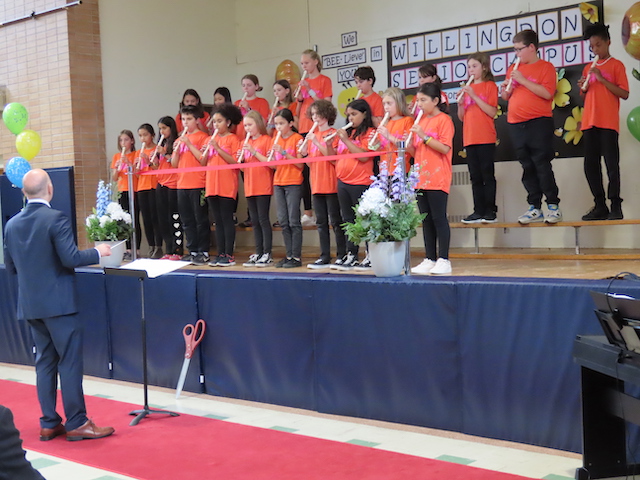 Addressing those in attendance, Principal Carmen Nicolas, who called herself “one proud principal,” said it was “a humbling moment to stand in front of this crowd. As you can see and feel, this is an exciting time for Willingdon.” Recounting that the idea only started to take form in January the same year, the process making the senior annex into reality was rigorous.

It all started with a consultation package addressed to the Willingdon governing board, in early 2019, to address the overcrowding issues faced by west-end schools. “This resulted in passionate discussion, brainstorming sessions, general assemblies, endless meetings, site visits, and finally the composition of a brief with feedback and concerns from the Willingdon community,” said Ms. Nicolas.

Among those she thanked were all the teaching staff, who she said votes unanimously for the project; Vice Principal  Doughan, who was later described to “hit the ground running” when she took up her post at Willingdon in January; vice principal of the junior campus Steve Spetsieris; parents; the Willingdon Governing Board and Home and School Association – and students for “believing in us, for sharing your ideas and for demonstrating such resilience while transitioning into the new campus.”

Speeches were also made by Ms. Doughan, EMSB Director General Ann Marie Matheson and two teachers described as integral to the project – science teacher Kathleen Usher and Phys. Ed. teacher Lara Belinski. Those assembled were also treated to poems recited by students Marlena Long and Quinn Abou-Fadel, as well as a song and flute piece performed by the choir of music teacher Nick Batzios. The ribbon-cutting ceremony took place on stage with the help of students Izaiah Williams and Maggie McKenzie.

In recent years, the popularity of EMSB’s west-end schools has prompted a burgeoning of enrolment. In the fall of 2018, the EMSB offered the building at 4850 Coronation Ave., formerly St. Ignatius of Loyola School to three West End schools, including Willingdon which accepted.

From a student body of 450 in 2013 to its present 570 students enrolled this year, the move marked a willingness to evolve with the growing student body, true to its motto “Come Grow with Us.” The expansion translates into improvements for both campuses. Now, gym times no longer need to be shared, specialists aren’t faced with the threat of losing their rooms, and Kindergarten students can use the bigger of the two gymnasiums on Terrebonne.

Kindergarten through to Grade 4 remain at the original building on Terrebonne.

Back on Coronation, “Our greatest joy comes from the sight and sounds of our students enjoying the simple things at the new site, like playing soccer on the fields, sharing a lunch on our picnic tables, reading a book on a meditation chair indoors or under a tree in the park, gardening, decorating their lockers, cooking and baking in our nutrition lab or building a marble machine in the maker space,” said Ms. Nicolas in describing the early days at the new campus.

Ms. Matheson hearkened back to the well-known line from A Field of Dreams: “If we build it, they will come” to describe the “journey” taken by the school’s administration leading the project.

Ms. Usher described some of the scientific endeavours occurring at the senior campus, including the naming of some 30 species of trees in the park grounds outside, the planting of a garden and the setting up of roof-top beehives.

As for two Grade 5 students, “I think it’s really nice. I get a lot of freedom in the new facilities. [I like] all the outdoor space, and the gym. It’s bigger than the other gym,” said Corrie Taylor, Grade 5.

“I like that there’s an opportunity to play sports in the grass fields,” said James Pawsey, Grade 5, and he appreciated the fact that he could be with just the older students.