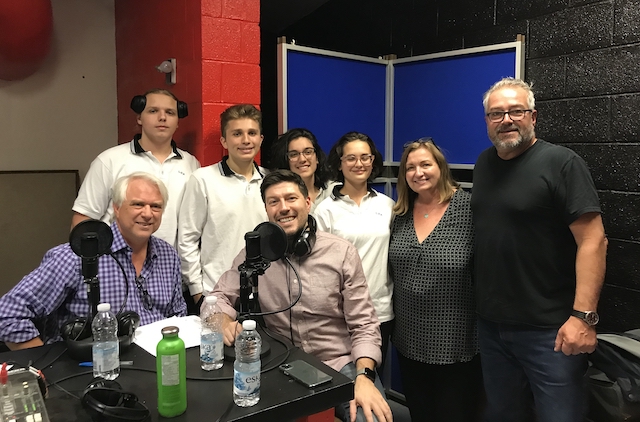 Media personality Elias Makos made a special appearance at the LaurenHill Academy Senior Campus in St. Laurent on October 8 to talk to students about media literacy. It was part of English Montreal School Board’s initiatives to explore the topic of fake news during the nation-wide Media Literacy Week, October 7 to 11.

A graduate of LaurenHill, Mr. Makos was among the school’s original set of students, when it first opened in the early 1990s. Stating that this was “a special place for him,” Mr. Makos graduated in 1997 and launched his diverse career, which ranged from working for the Expos and Canadiens in communications, to being a host on Breakfast Television Montreal, to hosting his own weekday morning radio show, The Elias Makos Show on CJAD 800, and making regular appearances on CTV.

With a keen sense of the ever-evolving digital world, Makos delivered a thought-provoking address to a Secondary IV class. He spoke about the differences in the way news and information has been disseminated and consumed over time. For example, 20 years ago, he said, people could gather information from a select number of printed news publications and broadcast stations – sources of information they trusted. Now there is a plethora of information available, sometimes fabricated content and from sources who don’t necessarily have the best intentions. Now “anyone can reach you,” he said.

Mr. Makos implored students to “step back and slow it down” when it came to assessing information that had content intended to promote hate. To disagree publicly is fine and even encouraged in a democratic society, but, he advised, be vigilant about content created to “make you hate someone.”

How does one determine the validity and source of information? “The final firewall is you,” he told students, and advised them to find out more about their sources and motivations.

On LaurenHill’s student radio show “The Voice,” Mr. Makos was interviewed by four Secondary 5 student radio hosts, Siena Blier, Ryan Danielis, Helena Marek and Marco De Vito. They asked him questions about online interference, sensitive topics he has addressed on air, how “to avoid being fooled by politicians” and freedom of expression.

The EMSB, working with Bell Media, will continue to explore this theme at different schools throughout the year.