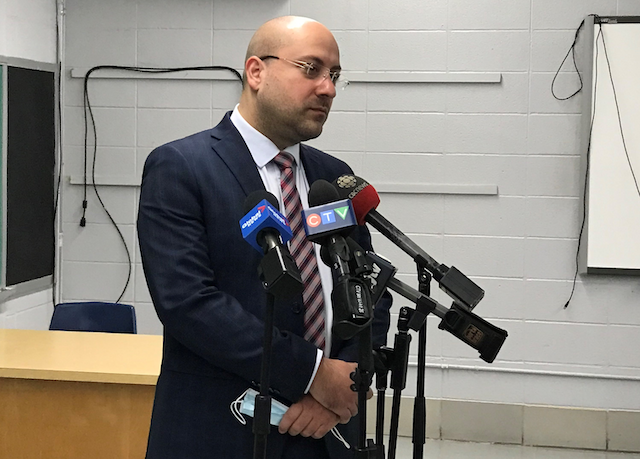 English Montreal School Board Chair Joe Ortona has issued the following statement in regard to a resolution opposing Bill 96, An Act respecting French, the official and common language of Quebec, and the decision by Ensemble Montreal to drop him as a candidate in the Loyola district for the November 7 municipal election.

I am disappointed by the reaction of some to the resolution adopted by the English Montreal School Board in opposition to Bill 96 and by the decision of Ensemble Montreal to not allow me to be a candidate under its banner in the upcoming municipal election.

As a school commissioner and as chair of the EMSB, I have supported the promotion of French. I am proud of the steps we have taken to ensure our graduates are able to live and work in French. Our French immersion program is second to none and in great demand by parents,

Our vision at the EMSB is of an inclusive Quebec where those of all backgrounds have the opportunity to contribute and where our diversity is celebrated. This belief is central to our opposition to Bill 21’s and 96. Both bills pre-emptively use the notwithstanding clause to override the Canadian Charter of Rights and Freedoms and the Quebec Charter.  This is contrary to our values and the values of the majority to Quebecers.

As was emphasized in our resolution the EMSB has significant concerns with many other elements of Bill 96. These include the following:

While we have concerns about the proposed constitutional amendment, we erred in bringing into question that Quebec is a nation. While we do not argue with the concept, we do want to ensure that English-speaking Quebecers are considered integral to the nation.

This concept is not at the heart of our opposition to Bill 96, and I will be recommending to my fellow commissioners that we modify our resolution and delete references to this matter. Having said that, we continue to urge the Quebec government to withdraw Bill 96.

In looking ahead, I will continue to speak out in favour of an inclusive Quebec where the use of French is promoted. At the same time, I will not back down from promoting the interests and the views of English-speaking Quebecers.

As for my candidacy in the Loyola district, it was not by accident that I chose to run there.  My reputation as a defender of English rights was well known by Ensemble Montréal. Many supporters want me to stay in the race as an independent and I am now in reflection where that is concerned.