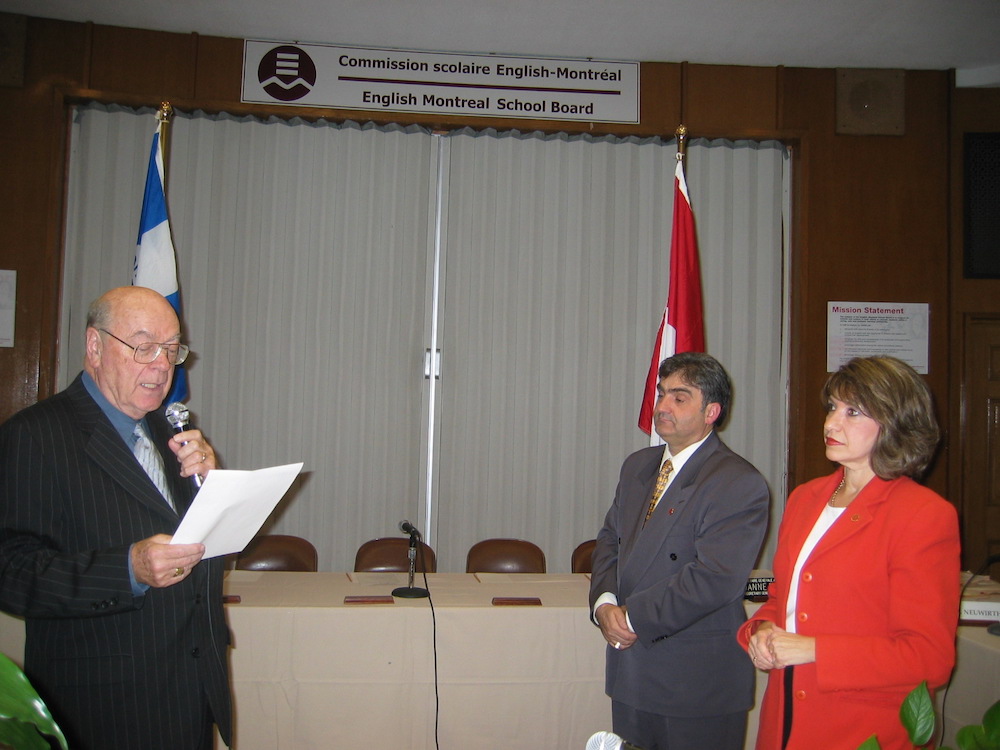 The English Montreal School Board is mourning the passing of a former chairman,  Dr. John Simms.

Dr. Simms was chairman of the former Protestant School Board of Greater Montreal from 1973 to 1977; a member of the Protestant Committee of the Superior Council of Education for Québec; president of the Quebec Trustees Association and the Canadian Education Association.  He served as the chairman of the  EMSB  for three years, from 2001 to 2004. In all he was a school commissioner for 41 years.

Dr. Simms selflessly dedicated his career toward serving the public in many areas. He was a graduate of Dalhousie University, Halifax; Presbyterian College of McGill University, Montreal and Columbia University, New York. An ordained minister,  he served both at the Church of St. Andrew and St. Paul, Montreal and at the Montreal West Presbyterian Church, where he presided over a congregation that blossomed into a large vibrant community during his ministry. He will be remembered fondly by many of his parishioners for his friendliness and warmth, as he presided over countless marriages, baptisms and funerals. He was the chaplain and director of several groups and societies – chaplain to Queen Mary Veterans’ Hospital and to The Last Post Foundation, president of the Westward Rotary Club, vice-president of the John Howard Society; a founding director of Alliance Québec, as well as serving as Lieutenant-Commander in the Canadian Armed Forces.

Dr. John Simms’ contributions to the Montreal Association for the Blind, where he served as Director General from 1977 until 1995, made a significant difference in the lives of many. During his tenure he enlarged the school, started a low vision clinic, and raised the outreach services and continuing education to their highest standards.

Among others, the awards of recognition honouring Dr. Simms’ contributions to society were many. They include: in 1962 – the “Military Medal’ (CD); in 1992 – the Confederation of Canada Commemorative Medal’; in 1995 – the newly constructed ‘Pavilion John A. Simms’ wing of the Montreal Association for the Blind; in 1999 – the Association for the Education and Rehabilitation of the Blind’s ‘Distinguished Service Award’; in 2000 – the Rotary International ‘Paul Harris Fellow Award’; in 2001 – the award from the Rassemblement annuel des Aveugles du Québec on White Cane Week ‘pour son implication exemplaire; in 2002 – the ‘Queen’s Golden Jubilee Medal, and the Rotary Club’s ‘Vocational Service Award’; in 2003 – the ‘John A. Simms’ Park on the corner of Westminster and St. Jacques Streets; in 2003 – the ‘John A. Simms’ Community Centre in Montreal West; and in 2010 – a transept in the Montreal West Presbyterian Church was named in his honour.

Dr. Simms  continued to be passionate about Nova Scotia where he was born and raised. He returned every year to preach in local churches and support their activities. Above all John Simms was a dedicated family man who encouraged his children and grandchildren’s personal and professional interests without reservation.

A memorial service will be held on Friday June 5, 2020 at 2 p.m. at Montreal West Presbyterian Church (160 Ballantyne Ave N).

Dr. Simms was  92. He is survived  by Lillian Wood, his loving wife of 66 years, his three children, Lorraine (Michael Smith), Monique (Bertram Forse) and Andrew, his grandchildren Catherine and Kelly (Forse) and step-grandchildren Ione and Rowan (Smith).

In lieu of flowers, donations in his memory can be made to the Montreal Association for the Blind Foundation https://habilitas.ca/donate-online/ (514-488-0043), or a charity of your choice.

We offer training on job-related skills, upgrading of certifications, customized training packages in vocational training, and much more.