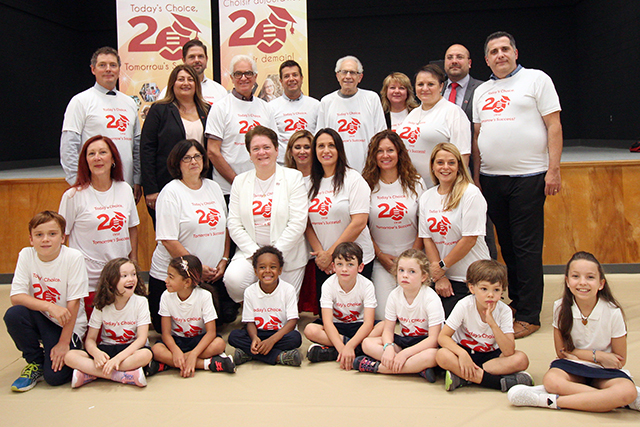 The English Montreal School Board will formally mark the 20th anniversary of linguistic school boards in Quebec on the first day of classes for the 2018-19 academic year, on Tuesday, August 28 (10:30 am) at Pierre Elliott Trudeau Elementary School (6855 Cartier) in Rosemount.

Pierre Elliott Trudeau Elementary School has thriving robotics and STEAM programs. It was originally known as Francesca Cabrini Elementary but encountered a name change to honour the former Prime Minister of Canada. Rebekka The Robot will be among those wearing a special t-shirt.

For the 20th anniversary of linguistic school boards, the EMSB Express Newspaper has a special section devoted to this milestone. A 20th-anniversary logo has been introduced as will the first ever EMS mascot, the EMS Bee named Bumble. As well, a new website is being unveiled, with facelifts for individual school pages to come.   All major events, such as the Career Fair, Volunteer Appreciation Evening and the annual Parent Conference, will have 20th-anniversary themes attached.  Schools and centres will get on board as well.

“As we mark the 20th anniversary since the Quebec government recreated public school boards along linguistic, rather than religious, lines I believe everyone associated with the English Montreal School Board has much to be proud of,” says EMSB Chair Angela Mancini.

At 88.6 percent the EMSB has the highest Success Rate in the entire province of Quebec among English public school boards based on a seven-year cohort.    This is all the more impressive given the fact the province-wide success rate is 80.1 percent.

At Pierre Elliott Trudeau School, Jessica O’Meara is among the teachers who were part of the very first EMSB graduating class in 1999. She attended Francesca Cabrini Elementary School as a child before moving on to Vincent Massey Collegiate and later McGill where she got her degree in inclusive education. To teach at the very same school she attended is a very special experience.

On July 1, 1998, the English sectors of the former Protestant School Board of Greater Montreal, the Montreal Catholic School Commission, the Commission Jérôme-Le Royer and the Commission Sainte-Croix merged to form the EMSB. At the time, the newly-formed board had more than 25,000 students in the youth sector and 12,000 on the adult side. Two years later enrolment at the primary and secondary levels rose past 27,000. Soon after, the Quebec government adopted legislation strengthening Bill 101. That development, along with demographics and a lower birthrate led to a steady decline in our student population.

“But recently, we have happily seen a turnaround where that is concerned,” said Ms. Mancini. “We now have 19,561 students at the elementary and high school levels, a 267 jump from last year.  When our 2018-2019 totals come in later this fall we expect the numbers to further improve. As for Adult Education and Vocational Services, there are more than 23,000 students registered – so nearly double the amount from when we were first established. With over 42,000 students in total, we remain the largest English public school board in the province.

“Over the last number of years, we have embarked upon some creative marketing and promotional campaigns while pouring a lot of effort into our social media platforms. This is all paying off.

At 88.6 percent the EMSB has the highest Success Rate in the entire province of Quebec among English public school boards based on a seven-year cohort.    This is all the more impressive given the fact the province-wide success rate is 80.1 percent.

Our mandate is to educate the youth at the primary and secondary levels while serving as a centre of lifelong learning in the adult and vocational sectors. We are indeed fulfilling this role.  Unquestionably the best part of our jobs is venturing into the schools and centres, be it for a Career or Science Fair, a storytelling competition or a graduation ceremony.”