Sabrina Gavita is a highly valued cycle 3 elementary teacher at Leonardo Da Vinci Academy in RDP.  Her dedication and involvement in various projects at the school have been priceless.  Respected by her staff and students, Ms Gavita has been involved in several EMSB entrepreneurship projects.  She has now teamed up with   LDVA Physical Education and Health specialist Daniel Gaudette, raising funds for the Neurological Institute in Montreal.  She and Mr. Gaudette recently met with  Ross Aiken, one of the key organizers for the Neuro Run fundraiser 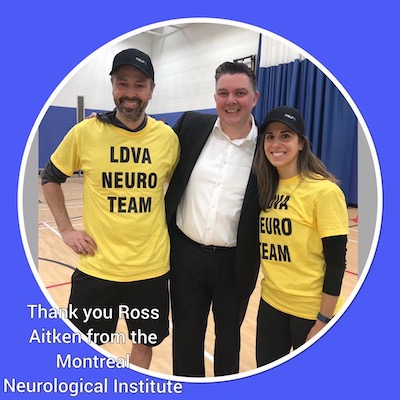 A school leading by example

Leonardo Da Vinci Academy (LDVA) is an elementary school located in the East End of Montreal, which supports and fundraises many important causes. Its most recent initiative involves creating a Neuro Running Team comprised of 24 energetic students and 12 motivated staff members.

“I’ve been running and fundraising for the Neuro since 2015, because this hospital represents HOPE for anyone fighting a neurological disorder, such as Parkinson’s, Alzheimer’s, Multiple Sclerosis, Epilepsy, ALS, or brain cancer,” says Sabrina.  “As a teacher at this school, I felt it was important to raise awareness on the importance of maintaining a healthy brain through physical fitness.”

Why the Neurological Hospital?

Her father, Panfilo Gavita, was diagnosed with an aggressive brain tumour in April of 2012; he lost his battle a few months later, and died in November 2012. His last two months were spent at the Montreal Neuro, where he received the best care possible from doctors and nurses. “We never thought something like this would happen to any of us in our family, but it did,” she said.

“Receiving support from family and friends is one thing, but being surrounded by a team of doctors who are exceptional at what they do, is another. Therefore, raising money for the Neuro allows me to honour my dad, a man that can never be replaced and whose presence brought joy, love and happiness to all of us who knew him.

Ms. Gavita  urges everyone to support the efforts by participating in the Scotia Bank Charity Charity Challenge 5k race on April 27. You can also make a donation at the following: