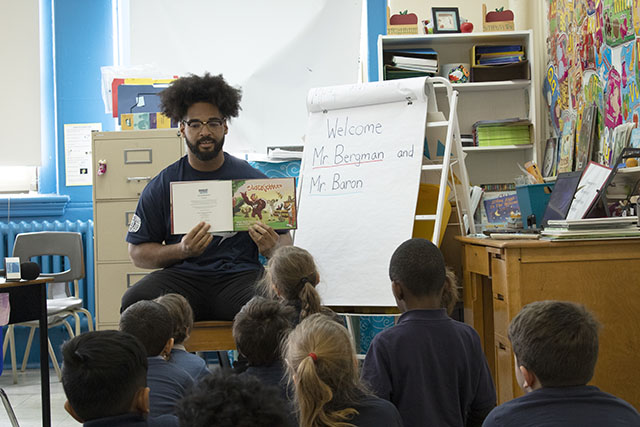 Friday, January 24 was a special day for Nesbitt Elementary School, as it hosted its first human library. Well-known Montreal-area authors, illustrators and journalists   filled the school’s classrooms to talk about their professions in the world of books, writing and libraries. They  participated as “open books,” answering questions from students and engaging in meaningful and respectful dialogue that underlies the human library concept. It was all part of the English Montreal School Board’s Space to Explore press conference, a morning program focusing on library transformation, and it kicks off the EMSB’s Elementary School Registration Week, (February 3 to 7).

Among the special guests invited to take part in the “Space to Explore” was well-known children’s author and illustrator Elise Gravel, who served as the honorary ambassador. Following her deep passion for drawing, Ms. Gravel has illustrated and written more than 50 books for young readers. She is also known for her creative educational posters. In 2012, her book La clé à molette won the Governor General’s Literary Award. The recipient of several other awards, her books have been translated into a dozen languages.

Julie Trépanier also joined the list of talented literary figures to take part in the event. She has been director of the Espace Jeunes of the Bibliothèque et Archives nationales du Québec for the past ten years. As someone passionate about children’s literature and young readers, her simple but “enormous challenge” every day, she says, “is to ensure that every child finds the right book.”

A journalist for CBC/Radio-Canada David Gutnick brings his experience as maker of radio documentaries to the classroom. Over the past 30 years, his stories have ranged in focus from former child slaves in Togo, to secret religious services in Beijing and ballet dancers in an American maximum-security prison. But he is also author of a picture book Mr. Mergler, Beethoven, and Me, which was published in March 2018.

Accomplished illustrator Philippe Béha, who has illustrated some 200 picture books and youth novels, and has written his own books as well, also answered questions from the young readers. His book, Léonard, le mouton qui ne voulait pas être tricoté, is a finalist in the Prix Peuplier 2020. Dr. Joe Schwarcz, director of McGill University’s Office for Science and Society, and well-known for his informative and entertaining public lectures, spoke about his recently released book A Grain of Salt: The Science and Pseudoscience of What We Eat.

Other special guests included Andrew Caddell, a former broadcaster, UN worker and public servant and co-author of The Goal: Stories about Our National Passion (2017). Julie Barlow   attended to discuss her recent book on hydroelectricity. She is the author of seven non-fiction books on subjects ranging from language, culture to travel and medicine. Theodore Fairhurst, whose mountain-climbing career included the successful ascent at the age of 70 of Mount Ojos del Salado in 2018,  talked about his first book, Dare to Reach (L’aventure d’une vie), which explores the mountain and life philosophies of two generations.

Once a student himself at Nesbitt Elementary School, CTV News Montreal anchor Paul Karwatsky   attended and served as emcee.  Also on hand was his mother Mary Ann Lichacz-Karwatsky, whose 2018 book My Father’s Store and Other Stories takes readers inside her father’s grocery store on Beaubien St., which for decades provided locals with a unique taste of Europe.

Other journalists attending includde Allison Hanes, who has been city columnist for the Montreal Gazette since 2017. From Global News Montreal  was Kim Sullivan (co-emcee), weather specialist and reporter at Global News Morning. Martin Daigle brought into discussion his experience as a video journalist for City News Montreal. He is also a Nesbitt parent.

Other children’s books authors who read from their books and answered questions from the young students were Lydia Lukidis, children's author of over 40 books and eBooks, and 30 educational books. Donna Santini came armed with a copy of her book Cooper Goes to the Vet: Golden Retriever. Woody Baron, a defensive tackle with the Montreal Alouettes, published his first book #JustaGobbler in August 2018. He spoke to the children about willpower, perseverance and self-confidence.

We offer training on job-related skills, upgrading of certifications, customized training packages in vocational training, and much more.