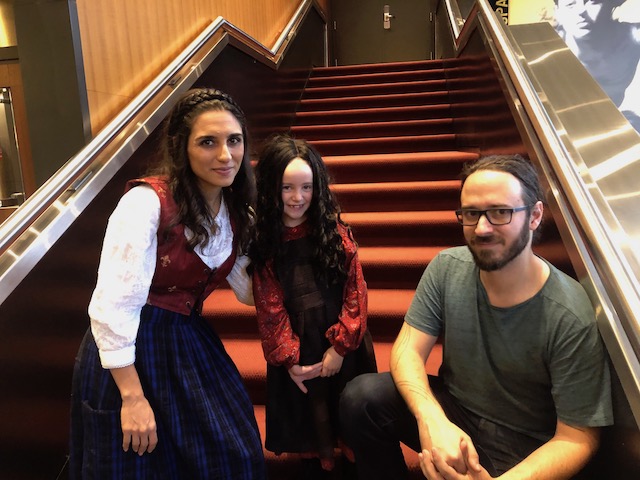 Tableau D’Hôte Theatre will be presenting the world premiere of Jesse Stong’s Winter’s Daughter, directed by Emma Tibaldo (Okinum, Productions Onishko), at the Segal Centre for Performing Arts from November 27 to December 8é. Based on the secret family history of local celebrity barber Gino Chiarella, Winter’s Daughter takes the audience to Southern Italy in 1921, in the aftermath of World War One where a couple copes with tremendous trauma and loss while wrestling with how to care for a Jewish child suddenly abandoned in their care.

Inspired by K. David Brody’s short story The Peddlers’ Daughter, Winter’s Daughter tells the story of Gino Chiorella’s mother, a first-generation Canadian from St-Leonard. When she died, Gino decided to travel to his mother’s hometown to visit his grandparents. Upon arriving, his grandfather revealed a long-held family secret, gifting him his mother's Star of David necklace, and sharing a story of the death and rebirth of their family.

“The deeply personal story that Gino invited Jesse to write about his family secrets will undoubtedly spark important conversations and build bridges between Jewish and Italian communities,” explains Mathieu Murphy-Perron, Artistic and Executive Director of Tableau D’Hôte Theatre and a graduate of LaurenHill Academy in St. Laurent. “As Tableau D’Hôte continues along the path of staging tales from history small and large, we must challenge notions that the only history worth presenting are those that captured public attention. We must labour to remember to also pay tribute to the stories like those of this Italian family that secretly took in an orphaned Jewish girl nearly one hundred years ago.”

Tableau D’Hôte Theatre (TDHT) was founded in 2005 by Mathieu Murphy-Perron and Mike Payette with the mandate of producing Montréal premieres of English Canadian productions. Since, TDHT has grown into a critically and peer acclaimed independent company often regarded for its ability to explore alternate forms of storytelling, its design aesthetic and for promoting work by both emerging and established Canadian playwrights. Our objective is simple yet unique in the English Montréal community: to engage audiences in provocative theatre that reflects the perspective and voices of the nations upon nations that make up “Canada”.

Tableau D’Hôte has a crowdfunding campaign to support the staging of Winter’s Daughter. Find out more at: bit.ly/FCCIWDEN